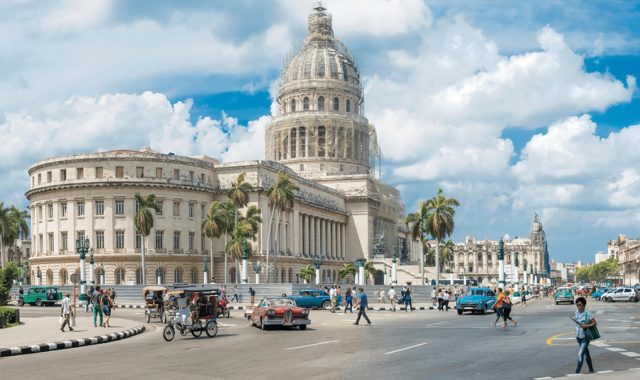 With every door I open in Havana, which resembles a nostalgic movie set, I see that the Cubans believe in goodness and un-conditional happiness, and experience the city’s energy that is kneaded with music.

I had been looking at the postcards I collected over the years, watching the same old Cuban films to warm my soul, and wondering about the stories of the happy people in the pictures. One day, I started rereading Hemingway’s Old Man and the Sea and realized that I had been feeding an enthusiasm. I was imagining the Cuban kids who named Hemingway “Papa” as he was playing baseball with his sons in front of Finca Vigía’s house; the adventures he had in the sea with his boat tied up in the garden; and the fishermen who dressed the fish they caught off the coast of Cojímar with sea salt and sour grape juice. I imagined the members of the Buena Vista Social Club emerging unex-pectedly from one corner and singing songs as if they were all still alive, and the strangers I’d exchange greetings with in the street. 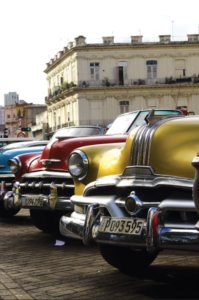 It wasn’t enough to have these recurring images in my head as dreams anymore. That’s when I decided to visit Cuba.I arrived in Havana on a scorching afternoon. With the curiosity and desire to explore this city I was visiting for the first time, I hailed a cab and headed towards Habana Vieja. We drove past Plaza de la Revolución which is home to buildings with reliefs of Che Guevera and Camilo Cienfuegos as well as José Martí Memorial. “Vas bien, Fidel,” it said under the re-lief portraying Camilo, one of the most belov-ed Cuban leaders. Camilo gave this response meaning “You’re doing well,” when, addressing the public, Fidel Castro looked back and asked, “Am I doing all right, Camilo?” I looked at this quote and his smiling eyes in the relief, smiling back. José Martí, who became a national hero with his contribution to Cuba’s fight for inde-pendence in the 19th century and who is also known for his poems and essays, was greeting the visitors to Havana with a more serious and pensive look. Judging from the expression on his memorial, you can feel that it was in no way easy for Cuba to build its presence.

Now, I am knocking on the door of the house in Habana Vieja, where I’ll be having the “casa particular” experience for the first time. Thanks to this service, you can make a reser-vation to accommodate at “lodging houses” and have the chance to witness local life. The door opens, and our hostess Bianca greets me with a big smile along with her grandchild who waves “Hola!” albeit with a shy look. We go upstairs so they can show me around the house. Bianca points to the balcony and the apart-ment next door saying, “If you need anything, you can call me from the balcony.” Looking around me on the balcony, I realize I am really in Havana!

Wandering around the sweet chaos of Ha-bana Vieja, the oldest part of the city, I start to see everything typical about Havana. Ema-nating the streets brimming with movement, sounds and colors, the nostalgic atmosphere is led by colonial structures and classic cars with stylish drivers waiting for their customers. I continue walking and encounter a crowded group of tourists in front of Hotel Ambos Mun-dos, where Hemingway wrote For Whom the Bell Tolls. With cameras hanging around their necks, they are impatient to go in. On Cathe-dral Square there are vendors selling guava juice and ice cream, college students, fortune-tellers in white dresses on every corner, and a few couples dancing in front of a café to the music overflowing onto the street. The melo-dies that carry “Son Cubano,” a music genre of African and Spanish origin, to present become the soundtrack of my trip to Havana. With these tunes in my heart, I visit the Museum of Colonial Art, the exhibitions at Wilfredo Lam Centre of Contemporary Art, and Alejo Car-pentier Foundation.

I meet Havana’s idiosyncratic lifestyle and lo-cal delicacies in the district of Vedado. Here, life fills the streets; it’s as if there are no house doors but streets open up into the houses. People chatting by the stoop, playing domi-noes with jokes, forming queues in front of the fruit stalls at the market, a family watching a football game on TV in a house with doors ful-ly open, two little girls practicing ballet moves in front of a fan… Each is like a frame that sums up the lives of the Cubans. 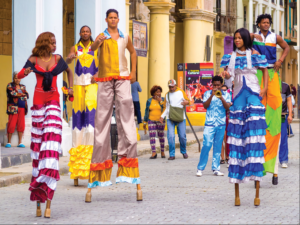 Cuba’s multicolored nature, inherited from its African origin, can also be seen here. It’s on women’s dresses and accessories, the tradi-tional men’s shirt called guayabera, school and business uniforms, hand-painted store signs and murals. Wherever I look, I see a different shade, feeling like strolling through a rainbow. I cannot help but smile. When people ask me where I’m from or say “Hello, welcome to our country,” I feel the pleasantries of life come to the surface. The joyous bustle of kids playing baseball keep the city’s rhythm ever lively. Cu-bans also love football, ballet, and music.

I wake up to a new day in Havana with the bal-cony chats of my neighbors. The topic ranges from TV series to which products are on sale at the market, from national politics to sports. The cries of the potato-seller are mingled with the shaking out of laundry. This is an ordinary day in Havana. Bianca calls me to the balcony. She gives me a tray of fried eggs, plantain, coffee, pineapple, mango, and guava. This breakfast has been shaped over time thanks to tourists visiting Cuba while locals greet the day with a sweet cup of coffee.

The breakfast is followed by house visits. My list includes the cadmium yellow Casa de la Obra Pía’s baroque courtyard; the rooms of Casa de Africa which is a giant mansion that displays objects brought from 26 African countries; Casa de los Árabes, which is the only mosque in the city and was built in Maghreb architec-ture; and the monumental El Capitolio.

Malecón, the esplanade stretching from one end of the city to the other, is the meeting place of locals after work hours. I am ready to greet the sunset with them. When I see people fishing on the coast, I imagine Hemingway’s stubborn and elderly fisherman, Santiago. In these moments when the sun paints the city orange, cars of all colors drive towards the set-ting sun. Three friends are sitting on the rocks playing guitar and singing songs with “Cuba” in them. The cordon is getting crowded as the young dance among the elongated shadows of people. I sit by the sea and surrender myself to the sound of the waves beating against the coast and the view of the darkening horizon. I think of what José Martí wrote, “I have two homelands; one is Cuba and the other is the night. Or are they one?” At that moment, Ma-lecón becomes the canvas of the painting of happiness that surrounds me. I know that one day this painting will call me back to this city. 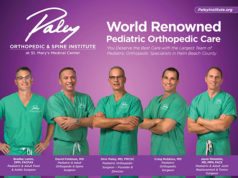 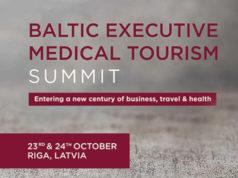 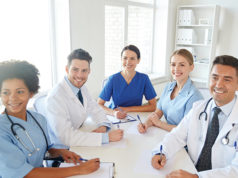 Medical Travel Accreditation: Does it Matter?